It's been 40 years since the passing of The Doors frontman, Jim Morrison. Today we take a look at the seven most controversial moments of his life.

Jim Morrison – poet, rock god, and one of music's most controversial stars – paved the path and set the bar high for future rock stars. Rock’s first bad boy was, once upon a time, a very reserved performer who sang with his back to the crowd. As we are about to honor the 40th anniversary of Mr. Mojo Risin’s death, here is a look back at some of his most controversial moments.

These are the controversial lyrics of the song that shocked the world and made The End one of the most requested songs at Doors concerts. The End is ranked #336 on Rolling Stone’s list of 500 Greatest Songs of All Times and Jim had written it to express his feelings – loosely – about breaking up with a girl he had formerly dated, Mary Werbelow. Jim is quoted saying, “Every time I hear that song, it means something else to me. It started out as a simple good-bye song probably just to a girl, but I see how it could be a goodbye to a kind of childhood. I really don't know. I think it's sufficiently complex and universal in its imagery that it could be almost anything you want it to be." With regards to the infamous line, were Jim’s feelings towards his parents accurate? The line was cited as a reference to the Oedipus complex. Ray Manzarek (The Doors' Keyboardist) explained, “Jim was giving voice in a rock 'n' roll setting to the Oedipus complex, at the time a widely discussed tendency in Freudian psychology. He wasn't saying he wanted to do that to his own mom and dad. He was re-enacting a bit of Greek drama. It was theatre!"

On September 17th, 1967, The Doors were invited to perform on the Ed Sullivan Show. Moments before they were to go live, Mr. Sullivan requested that Jim change the lyric in Light My Fire from "Girl we couldn’t get much higher" to “Girl we couldn’t get much better”. Jim agreed to the change however, when he performed the song on national tv, he either forgot out of nervousness or completely dismissed the request, and sang the song with its original lyric. The next six shows which had been planned for The Doors to perform were quickly cancelled by Sullivan.

Morrison became the first ever rock artist to be arrested while performing on stage. On December 9, 1967, Morrison was found by a police officer with a girl in a shower stall before his performance at the New Haven Arena, in New Haven Connecticut. The officer told Morrison “To beat it”, to which Morrison replied “Eat it”. Morrison was maced by the officer. The show was delayed while Morrison recovered. Later, halfway through the set, Morrison decided to recount the story to the audience. His version was laden with obscenities and belittled the New Haven police. Morrison was promptly arrested and was taken to the local police station where he was booked on charges of indecency and public obscenity. The charges were later dropped due to lack of evidence.

Other Arrests: Age 16, Las Vegas, and The Plane Trip

September 23rd, 1963 Tallahassee, Florida. Jim Morrison was charged with petty larceny, disturbing the peace, resisting arrest, and public drunkenness at a football game. Morrison allegedly got rowdy and made fun of the football players. In addition, he stole an umbrella and a helmet from the open window of a police car. The charges were later dropped.

January 28th, 1968. At the Pussycat a’ Go Go in Las Vegas, Morrison was charged with public drunkenness and vagrancy. It was reported that Morrison was smoking a cigarette like a joint which caught the attention of some heavy hitting bouncers. He was in knocked on the head by one of the bouncers and chaos soon followed. Morrison was promptly arrested.

November 9th, 1969, Phoenix, Arizona. Morrison was booked into a city jail for drunk and disorderly conduct and for interfering with flight crew and attendants on a Continental Airlines flight. Jim and his friend Tom Baker were on their way to Phoenix to watch a Rolling Stones concert. Morrison had previously been blacklisted from performing in Phoenix in 1968 after almost causing a riot during one of his shows. 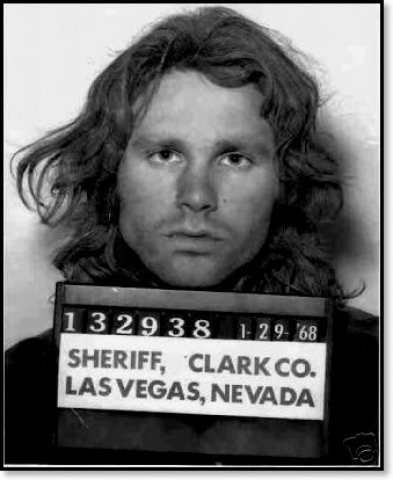 What other controversial situations surround Jim Morrison? Keep reading to find out.

It’s said that Morrison had been drinking all day on that very famous day and by the time he had started performing was just overly fortified in alcohol. The Doors were performing at the Dinner Key Auditorium, there was no air conditioning and the crowd was going crazy. It was very hot inside and the seats had been removed by the ticket promoter to increase seat sales. It was a crowd of 12,000 – restless – in a place that normally held 7000. Jim’s drunkenness resulted in a weak performance which pushed the crowd’s anger over the top. One thing led to another, The Door’s Manager Bill Siddons recalled, "The gig was a bizarre, circus-like thing, there was this guy carrying a sheep and the wildest people that I'd ever seen". Equipment chief Vince Treanor said, "Somebody jumped up and poured champagne on Jim so he took his shirt off, he was soaking wet. 'Let's see a little skin, let's get naked,' he said, and the audience started taking their clothes off. One thing led to another."

On March 5th the Dade County Sheriff’s office issued a warrant for Jim’s arrest claiming that the rock star had exposed his penis on stage, shouted obscenities to the crowd, was drunk during the time of his performance and had simulated oral sex on Robbie Krieger. Morrison was later convicted, sentenced to six months in jail and ordered to pay a $500 fine. Morrison’s lawyer appealed the decision and the rock legend would remain free until another verdict was made. Morrison later died before the matter was legally resolved.

Nobody ever saw Jim Morrison’s penis and Robbie Krieger denied that Morrison ever simulated oral sex on him. On December 9th, 2010 Jim Morrison was granted a posthumous pardon for the Miami incident. 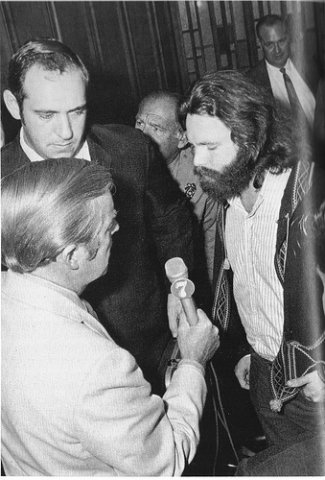 Jim Morrison’s death shocked the world. He was another one, much too young to leave the world. Morrison had once also said that he too would be a member of the infamous “27 Club”, whose members at that time included Janice Joplin, Jimi Hendrix and Brian Jones. Later Kurt Cobain would also join this club. At the time of his death, rumours circled that Morrison was not dead, that he had faked his own death to merely escape the world that he had grown tired of. His body was never seen, an autopsy was never performed, he was pronounced dead by a doctor in Paris who had written in the medical records that Morrison had died of heart failure, since there was no evidence of foul play. It was later revealed that Morrison had actually died of a heroin overdose – a rumoured suicide – as Morrison was never a heroin user. He was found on the toilet seat in the Rock’n Roll Circus, where he had snorted heroin. Morrison’s friends had brought him back to the apartment and had placed him in a cold bath. This was a trick that was used to attempt to revive overdose victims. He was found here by his girlfriend and heir to his estate, Pamela Courson who herself died a few years later at the age of 27. 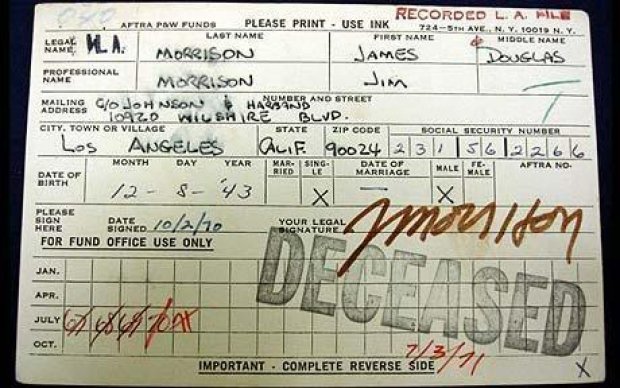 Since 1971, Morrison fans have flocked to his grave located in the Père Lachaise Cemetery in Paris, to do drugs, have sex and just honour the rock legend. The grave has been vandalized on several occasions. In 1981 a Croatian sculptor Mladen Mikulin created a bust of the legend which was placed on Morrison’s new headstone – it had been stolen prior – the bust was defaced through the years and eventually stolen as well in 1988. The current headstone was placed by Morrison’s father, Admiral George Stephen Morrison. The headstone reads a Greek quote that translates to “True to his own spirit”.

The French wanted Morrison’s grave removed from the famous graveyard. However, the request was rejected when discovered how popular the grave is as a tourist attraction. The grave is the second most visited attraction in Paris, the Eiffel tower is first.

To this day, the Doors continue to sell millions of records, Morrison’s and The Doors’ music will live on for years to come. His legend is his controversy and music, his humanity is the proof that he was not untouchable and all legends come to an end. 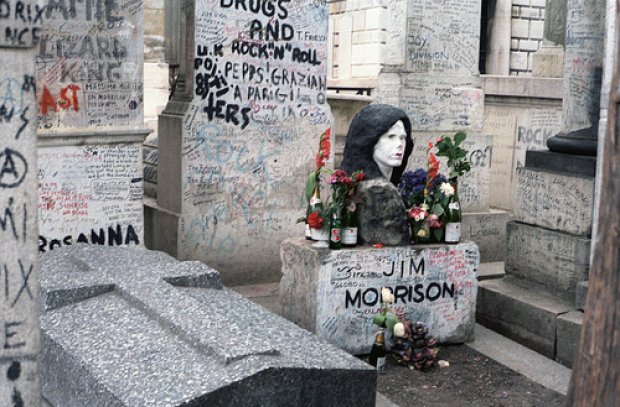